Friction generated during the unwinding of the roll of thick plastic film creates static. These static charges attract contamination from the surrounding area onto the film. During the heating and forming of the film to produce the blisters, the contamination bonds to the plastic film, creating permanent inclusions and potential scrap.

The warm plastic generates even more static charges as it cools. This will result in further contamination or filling issues. These issues can include contamination from operators such as hair or skin, or repelling of the product, for example medical tablets or powders, during the filling of the blister.

The top sealing layer can also suffer with static issues. Statically charged products can be pulled out of the blister when applying an aluminium tamper seal, or contamination can be attracted to the plastic seal causing sealing issues or product rejection due to visible contamination.

All of these problems can be avoided by controlling the static charges.

Rolls of material which are purchased and found to be already contaminated will need to be cleaned. A web cleaner, such as a Meech Non-Contact CyClean, mounted prior to thermoforming is ideal for removing and capturing contamination safely. An ionising air curtain such as a 957 or 959IPS will remove the contamination but will not capture it. However, static control products can be the solution where budget is limited or quality is not imperative.

Controlling static charges during product packing will allow the product and clean blister packaging material to come together, preventing product misbehaviour and inclusion of contamination. This can be done using a long range ionising bar such as a Meech 929IPS or 971IPS. 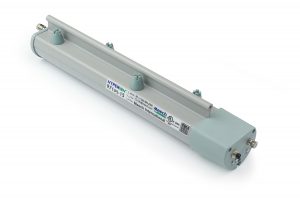